Forget everything you think you know about British food – the boiling, the kidney pies, the Dickensian gruels. The nation has suffered a rather disparaging reputation (which has not been entirely undeserved – Beef Wellington is still a thing) but any food-minded traveler worth her salt will know that London’s got oodles to offer. The last decade has seen London rival Paris and New York for dining prestige, and partaking in London’s continental classics and New World innovations could take up an entire visit . In a nutshell, you’d be well advised to go in with a solid foodie game-plan. If you’re after restaurants with big names at the helm, you’ve got options. If you’re after cult favourites, you’re in good company (just be ready to queue). And if you’re happy to stick with the long-standing classics, then we applaud you. Some institutions are institutions for a reason. For all you foie gras fans and squid junkies, we’ve done our best to make navigating this magical city a little bit easier. We’ve narrowed down our top ten favourite restaurants in London, and as one might imagine, our picks came from a vast, robust, and hugely tasty pool. So go forth and nibble, and be sure to leave a friendly review however you can; London food is undergoing a total image overhaul, and you’re lucky enough to be part of it! 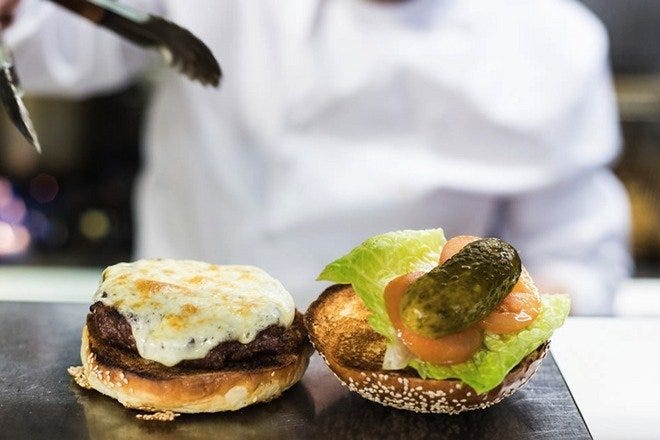 Harry Morgan might brand itself as a “NY style deli”, but we have to take issue with that. The St John’s Wood deli is London through and through, and whether they be actual Jewish families or simply fans of the kreplach, west Londoners have been flocking to its brightly lit doors for decades. Go for deli classics like chopped liver and matzah ball soup, or go a bit more diaspora with haddock and chips for £13.95. They also happily do home delivery, a dream come true for those us us unlucky enough to live away from St John’s Wood High Street’s idyllic calm. There is simply no comfort food like it.

Recommended for Best Restaurants because: It’s Jewish deli food done perfectly right in a city where you’ve often got to search for it.

Arianna’s expert tip: Get there early for brunch – the queues can get a bit intense! 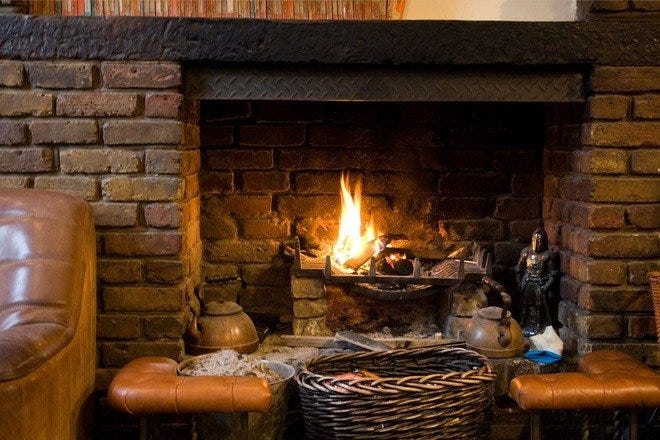 The Scolt Head is a double-hitter: lively pub bringing together the fresh-faced inhabitants of both Islington and neighboring Dalston, and dreamy date-perfect restaurant. On offer is some of the most coveted of classic British fare, including slow braised pork cheek, stuffed mackerel, and whole baked Camembert (–okay, maybe not British, but classically delicious). Book in advance for cozy back seating in the fabulously decorated dining space, a perfect storm of winterish mahogany and dark brick, ideal for sipping a full-bodied red. It’s like you and your date have been stranded in a Highlands cabin, but we might be letting our imaginations get away with us…

Recommended for Best Restaurants because: De Beauvoir is a tragically underrated bit of London, and The Scolt Head is its crowning jewel.

Arianna’s expert tip: Arrive early for drinks in the adjoining pub – it gets a party atmosphere after dark on weekends.

Read more about The Scolt Head → 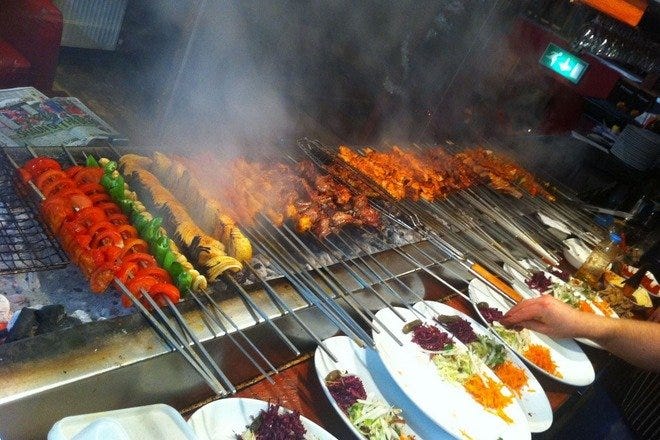 When it comes to food, sometimes it’s best to follow the crowd. And on a Friday night around 1am, Camberwell’s art students and longtime residents will be crowding into FM Mangal, a cult favourite turkish takeaway joint and multi-level restaurant. The menu is filled to the brim with perfectly executed classics, and you could feast for as little as £15. It’s unclear what kind of magic the FM Mangal staff use on their skewers and in their sauces, but it’s the stuff of food mythology. Go for fresh calamari and Yaprak doner, loads of friends and the spirit of sharing. Just don’t make plans to go out afterwards – you’ll be in the very best type of food coma.

Recommended for Best Restaurants because: Its reputation borders on mythological – you’ll be dreaming of coal smoke and spicy sauce.

Arianna’s expert tip: Try to get a view of the flaming grill pit – it’s a sight (and smell) to behold. 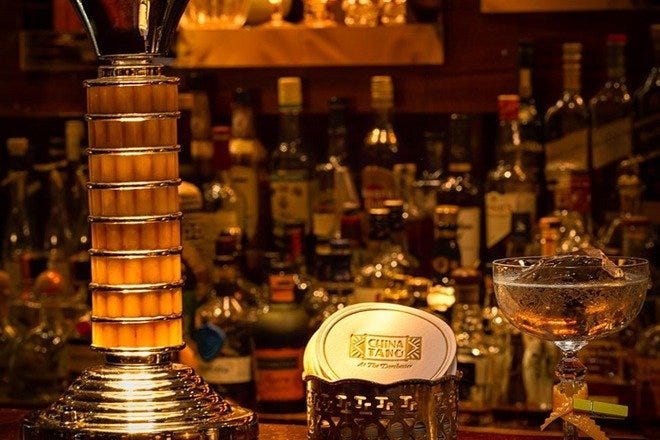 As if you needed more to fill your Wong Kar-wai post-colonial art deco fantasies, now you can spend an evening in London’s most glamorous Chinese restaurant. China Tang is part Dorchester, part more modern foodie lair, and it’s the perfect spot for a touch of totally all things unique – the interiors are mind-boggling. Set menus include classics like Peking duck, but if you go a la carte you can enjoy jellyfish, drunken chicken, scallop congee, or seafood hotpots (with lobster, abalone, scallop, and more. Though it’ll set you back £150). It’s charming and vibrant, and stands out from the crowd with refreshing Technicolor elegance.

Recommended for Best Restaurants because: There’s no more stylish way to explore Chinese cuisine than a trip underground to China Tang. 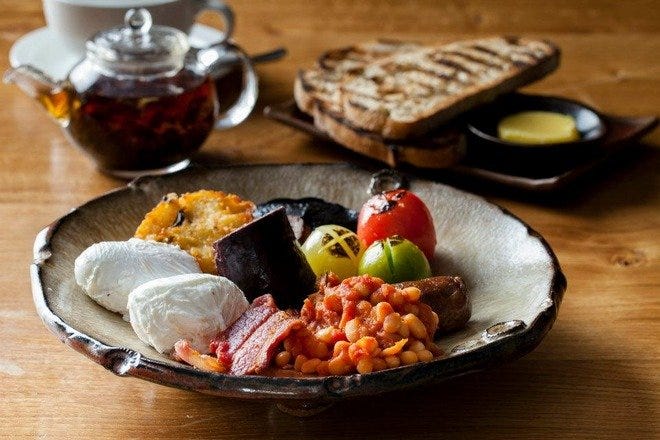 Some dining experiences come with a side of vertigo, and if you can handle the breathtaking heights (almost clear to the top of Heron Tower, just above Sushisamba) then Duck and Waffle could easily become your new London favorite. One of the few 24 hour establishments in the city (if you’re willing to shell out close to £50 per head), Duck and Waffle is sinful and stunning. Foie brulee (yep, it’s exactly what you think it is) and bowls of crab are small-plate alternatives to the eponymous duck and waffle, a sweet and savoury blast of soul food to fuel your Shoreditch nights. A can’t miss for jet-setters, umami enthusiasts, and adventurous Londoners.

Recommended for Best Restaurants because: It’s high-flying swank with a care for both the food and the diner’s experience. The staff are passionate and super friendly.

Arianna’s expert tip: Get a corner seat for incredible views of the Gherkin.

Read more about Duck and Waffle → 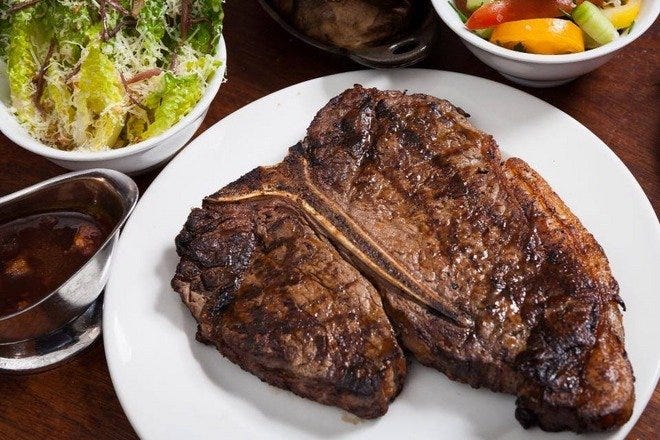 Hawksmoor brought the art of steak to London, and it did it with artful, wintery decadence – the type which was welcome off the back of the whole offal renaissance. Its ethos of “making sure the food [they] serve is as good as possible, that the animals the food comes from lived a decent life, [and] that everyone who works with us enjoys what they do” has given them a buzz which has lasted the test of time; its five London locations have remained as popular as the day they opened their doors, and their extensive, beautifully curated cocktail list only gives visitors more reasons to adore Hawksmoor.

Recommended for Best Restaurants because: It’s the best steak you’ll have in Britain, you have our word.

Arianna’s expert tip: Their cocktail list works in chronological order – perfect if you feel like an “anti-fogmatic” or a “bridging drink”. 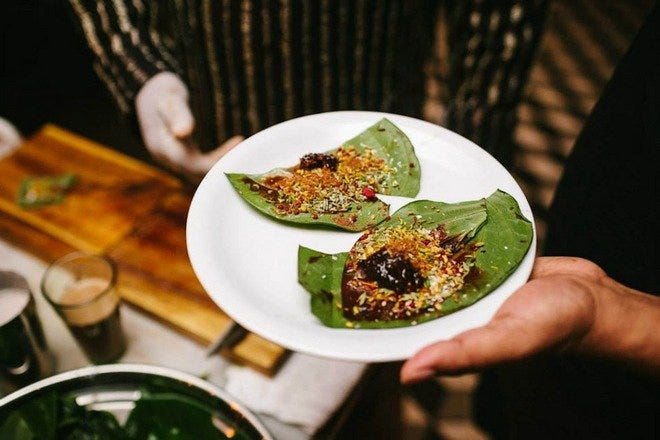 “Rich businessmen, sweaty taxi-wallas and courting couples. Fans turned slowly. Bentwood chairs were reflected in stained mirrors, next to sepia family portraits. Students had breakfast. Families dined. Lawyers read briefs. Writers found their characters.” It’s hard to imagine that Dishoom could live up to such a description of their old-school influence, the Irani cafe. But indeed, it’s no wonder that Dishoom has developed the cult following that it has: the self-described “Bombay Cafe” has executed the perfect take on Iranian-influenced Indian food with an almost Disneyland-ish colonial vibe. Implanted in hip, newly renovated Granary Square (specifically one of its disused railway yards), Dishoom offers some of the richest, most unusual and authentic west Asian food in the city. Small plates like the crunchy “bhel” are followed by classics like a slow-cooked Kacchi lamb biryani and chicken curries. If you haven’t heard, now you know: Dishoom is the most stylish embodiment of brilliant culture-crashing cuisine, and it can’t be missed.

Recommended for Best Restaurants because: It’s one of the few buzz-saturated London hotspots which has actually exceeded its hype.

Arianna’s expert tip: The “black house daal” is out of this word, and goes perfectly with every dish. 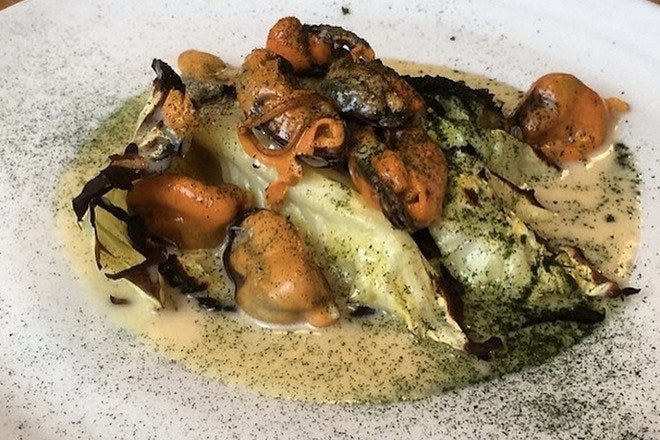 On the ground floor of Shoreditch’s Tea Building, the seven-storey start-up hub right across from the Overground, is a different kind of innovation hub: Lyle, the creation of borderline “experimental” chef James Lowe. There’s a clean, ultra-sanitary feel to the whitewashed walls and glistening steel detail that sets it apart from Shoreditch’s whole cultivated-grittiness thing. The place feels grown-up, which is a perfect balance to how playful and thrilling the set menu is. Goat curd and apple come served underneath a paper-thin dome of spun sugar. A red wine is described as having farm-like “funk”, and stingray is placed in front of us with utter nonchalance. It’s the perfect date spot for innovative thinkers, or just food enthusiasts who are not easily impressed.

Recommended for Best Restaurants because: Lyle’s hip minimalism plays beautifully against the (occasionally bonkers) components of its menu.

Arianna’s expert tip: Make sure your date is the adventurous type. If you go for the set dinner it would be wise to expect nothing and be ready for anything. 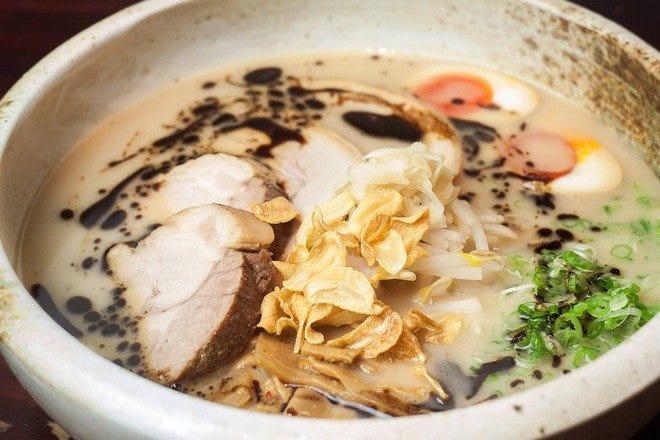 To even speak of Bone Daddies after having dined there is a sort of synesthetic exercise. Memories of chicken scratchings, miso, pork neck chashu, chicken bone stock, make for an exhausting culinary love. But we’ll take those sesame sweats any day: Bone Daddies is the most mouth-wateringly thrilling ramen experience you’re likely to get in London, and you can find it in one of London’s most entertaining neighborhoods. Their Soho branch is itty bitty, and they don’t take reservations, so bring only a friend or two (ones with whom youre comfortable getting sloppy with) or try their late-night menu. They offer up the curry ramen of your wildest fantasies (fried chicken, padron peppers & cabbage) for �10, and chilli chashu pork buns for �4.80. Be warned: after your first visit, you won’t be able to stay away long.

Recommended for Best Restaurants because: It proves that ramen is more than a new London trend – it’s traditional Japanese indulgence done perfectly right.

Arianna’s expert tip: Their Tantamen 2 is the single greatest achievement in umami harmony that we’ve ever encountered. 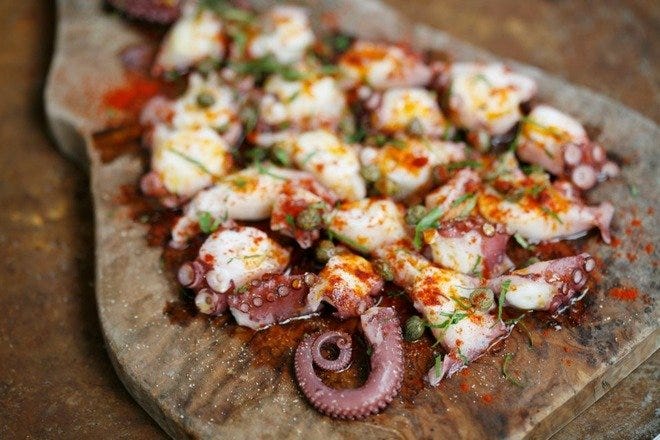 Barrafina offers the kind of food you have to work for. It’s virtually impossible to avoid an hour-long queue (the seats barely hit the double digits), and you’re likely to be elbow-to-elbow with strangers. But once you’ve got your first glass tinto, Barrafina’s exquisite spirit becomes increasingly exposed. Dishes like octopus with capers (at £9.80) and chicken thigh with Romesco sauce (£7.5) are profound in their simplicity, bringing out the simple, clean, startlingly robust flavors. More ambitious dishes like the Pluma Ibérica with confit potatoes showcase the rare culinary gifts of Head Chef Nieves Barragán Mohacho and her team, for a total experience which is dizzying and unforgettable. Barrafina is truly a gift, and absolutely worth the wait.

Recommended for Best Restaurants because: The care put into each dish is unparalleled, and you’ll be reluctant to give up your seat (despite the desperate crowd).

Arianna’s expert tip: Get a glass of cava whilst waiting in the queue – the Gramona Gran Reserva 2011 will make time fly by!