The nation’s capital is bathed in different shades of red, white and blue throughout the year (especially during campaign time) but once the holiday season approaches visitors will find every color of the rainbow featured in lights, ribbons and ornaments.

Starting in November and lasting until the New Year, holiday happenings are everywhere in Washington, D.C. The best part is the huge variety of attractions to see. So while you are whittling down your shopping to-do list, make sure to check out these holiday events that are sure to put you in the holiday spirit.

What’s the holiday season without a viewing of the Charles Dickens’ classic tale ‘A Christmas Carol’? Instead of watching a movie, be sure to catch the Ford’s Theatre production and take in some history at the memorable venue. How about careening down slides made entirely of ice and seeing some of your favorite holiday characters made entirely of frozen water? Check out Gaylord National Resort and Convention Center’s Christmas on the Potomac celebration.

If you enjoying seeing thousands of twinkling lights, try your luck at winning a lottery ticket to watch the First Family flip the switch at the National Christmas Tree Lighting or go to the National Zoo to see your favorite animals, reptiles and amphibians aglow during Zoo Lights.

To welcome in the New Year, head over to Virginia for First Night Alexandria which features fireworks on the Potomac River, kid-friendly events and live entertainment.

Don’t be a Scrooge! Grab the coat, scarf and hat and head to these top D.C. holiday attractions! 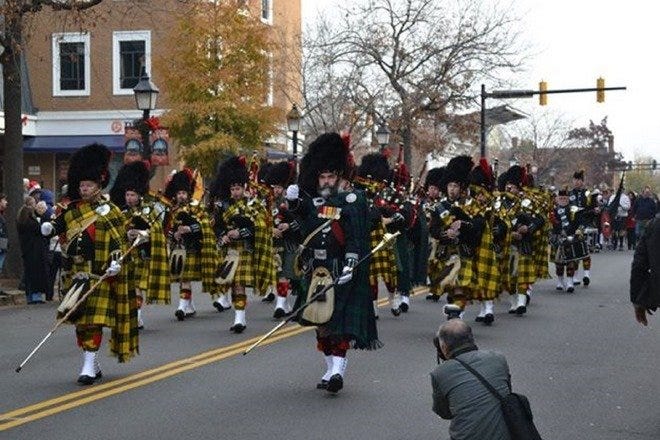 Old Town Alexandria’s history is rich with Scottish heritage. As a way to pay tribute, the town hosts an annual Scottish Christmas Walk Weekend filled with activities everyone can enjoy. Take the kids to the George Washington Masonic Memorial Temple in the morning for Deck the Halls, an event featuring arts and crafts, music and a visit from Santa. Come back in the evening for a Scottish tasting menu featuring beer, wine and light fare. The biggest draw is the parade which features more than 100 marching units filled with tartans of Scottish clans, the haunting cries of the bagpipes, and re-enactment groups. METRO: King St.- Old Town

Recommended for Things to Do in December because: A great event to celebrate Scottish heritage and learn more about the country. 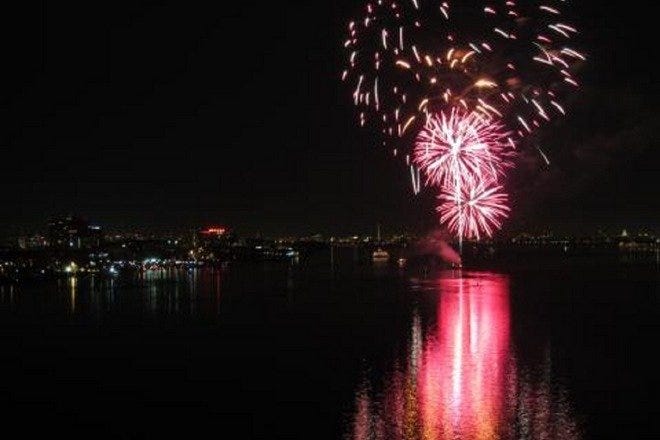 Washington, D.C. no longer has an official New Year’s firework celebration. (We are still scratching our head over this one.) Fear not because a nearby Virginia town has answered the call to see those bright colors burst in the sky. First Night Alexandria is one of the best family-friendly celebrations around. Local venues turn their buildings into performance venues to showcase local and regional talent. More than 100 performances including musicians to artists will take place before the spectacular fireworks display on the Potomac River at the foot of King Street. METRO: King St.- Old Town

Recommended for Things to Do in December because: New Year’s Eve without fireworks is like Christmas without a tree. While several other cities have wonderful displays, Alexandria’s is not to be missed.

Gina’s expert tip: The fireworks are free but if you want to see the performances you will need to pay admission and get a First Night Badge. 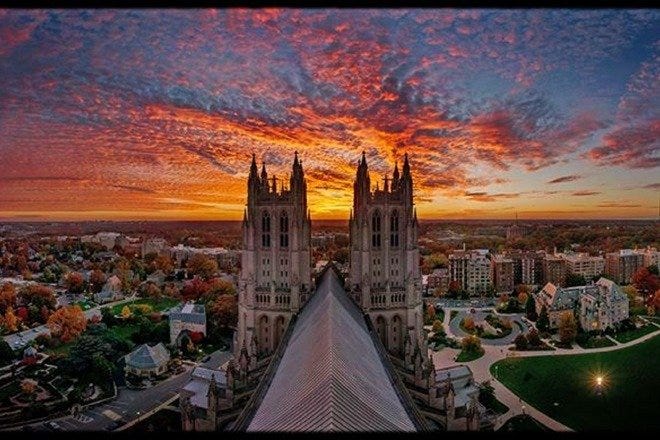 With Neo-Gothic design harking back to centuries long ago, the Washington National Cathedral is a beautiful structure to behold especially during the holidays. The church several programs to celebrate the birth of Christ. Don’t miss the Dec. 6-8 performances of G. F. Handel’s ‘Messiah’ performed by the Cathedral Choir and resident Baroque orchestra joined by renowned soloists from around the world. Be a part of the annual live simulcast worship service with the cathedral congregation and the Evangelical Lutheran Christmas Church in Bethlehem, Palestine on Dec. 21. Christmas Eve and Day offer beautiful services to attend featuring readings from Holy Scripture and instrumental music. METRO: Tenleytown/AU

Recommended for Things to Do in December because: A beautiful place to celebrate faith and take in some incredible musical performances.

Gina’s expert tip: Passes are required to attend several of the events around Christmas so plan accordingly. 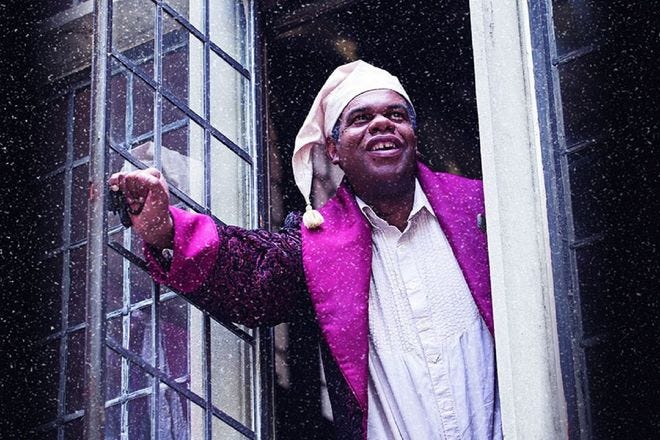 All of these joyful holiday events are enough to drive Ebenezer Scrooge mad so come see him transform from his mean, old ways thanks to visits from the ghosts of Christmas past, present and future in Charles Dickens’ ‘A Christmas Carol’ presented at Ford’s Theatre. The musically-infused play, a theatre tradition for more than 35 years, would surely bring a smile to even Scrooge’s harsh face. While taking in the annual holiday show, make sure to explore the history of the venue which was the site of President Abraham Lincoln’s assassination in 1865. Metro: Gallery Place, Metro Center or Archives/Navy Memorial.

Recommended for Things to Do in December because: Seeing ‘A Christmas Carol’ is a holiday tradition. Why not see it in person instead of on television?

Gina’s expert tip: The two-hour show, running from Nov. 21 through Jan. 1, is recommended for ages 5 and up. 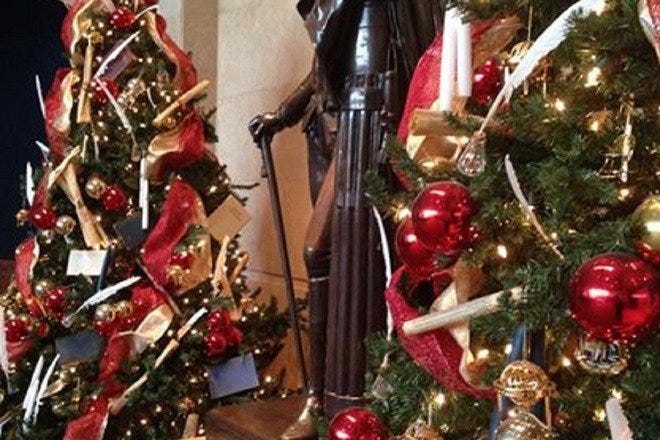 In 1787, George Washington brought a camel to Mount Vernon to entertain his guests. During the Christmas season, patrons will be able to meet a camel at Old Hickory’s home. How many other places offer that during holiday time? Take in the beautiful decorations including 12 Christmas trees and watch historical chocolate-making demonstrations. Guests may also take a holiday dinner tour to see what the Washington family ate and how it was stored, prepared and served on Christmas more than 200 years ago. Try to catch their resident fifer during a musical demonstration of 18th-century-holiday music. METRO: Huntington Station

Recommended for Things to Do in December because: In an area that cherishes history, Christmas at Mount Vernon is a fun event to see how the holiday was celebrated more than 200 years ago.

Gina’s expert tip: You can take oodles of pictures around the estate but put those cameras away once you step inside George and Martha’s house. Photography is prohibited in their home. 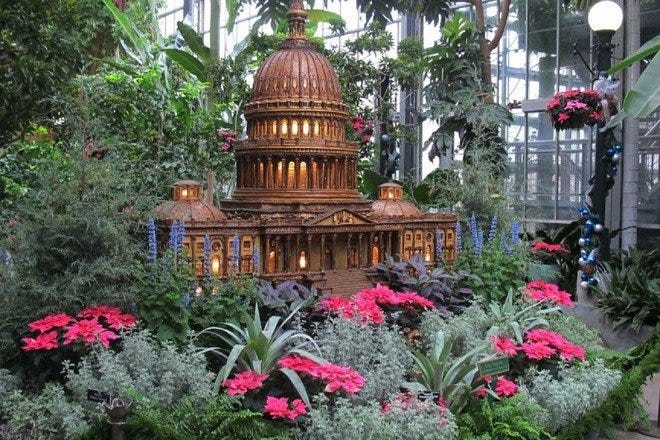 Photo courtesy of US Botanic Garden

Once you see poinsettias, you know the holiday season is upon us so why not head to a place that knows how to make beautiful plant displays? The U.S. Botanic Garden’s annual Season’s Greenings features a showcase of the holiday flowers, one of the largest indoor decorated trees in the district and trains meandering through unique displays. If you have a Thomas the Train fan in your house, you can usually find him or one of his friends huffing and chuffing down the tracks. Patrons will also see smaller versions of familiar landmarks like The White House, Capitol and Lincoln Memorial but be sure to look close because they are made out of plants. METRO: Federal Center

Recommended for Things to Do in December because: Winter hits the D.C. region hard so get your fill of lush greens at this tropical paradise.

Gina’s expert tip: While they encourage people to take pictures, tripods are not allowed in the exhibit due to the high volume of visitors.

The National Zoo features mammals, reptiles and amphibians from all across the world. Thanks to ZooLights, guests can see favorites like the giant pandas, Asian elephants and sea lions in person are represented in thousands of dazzling lights as well. Besides the lights, the zoo offers several activities including winter-themed crafts, getting pictures with costumed characters, listening to storytellers, and watching ice sculpture carvings. Warm-up by going into the indoor houses or grab some hot chocolate for sale. The free event has also added large, glowing animal lanterns and reflecting lights as part of ‘Entre Les Rangs,’ an interactive art exhibit. METRO: Woodley Park

Recommended for Things to Do in December because: The National Zoo is a great place to go during the day but seems almost magical with the twinkling lights at night.

Gina’s expert tip: Parking at the zoo fills up fast so go early or take the Metro. 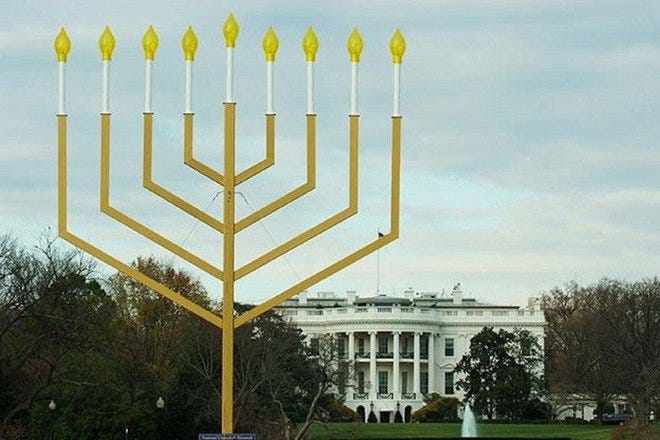 As a way to celebrate Jewish heritage and religious freedom, The White House welcomes thousands of people to the Ellipse on the first day of Chanukah to witness the lighting of the world’s largest menorah. The Jewish holiday, also known as the Festival of Lights, is a celebration honoring the rededication of the Holy Temple in Jerusalem. A candle is lit on the menorah each night for eight days. The event features musical performances as well as activities for the entire family to enjoy. METRO: Federal Triangle/Metro Center

Recommended for Things to Do in December because: The lighting is one of the most prominent public Chanukah programs in the world.

Gina’s expert tip: Tickets are free but you must register for them in advance. 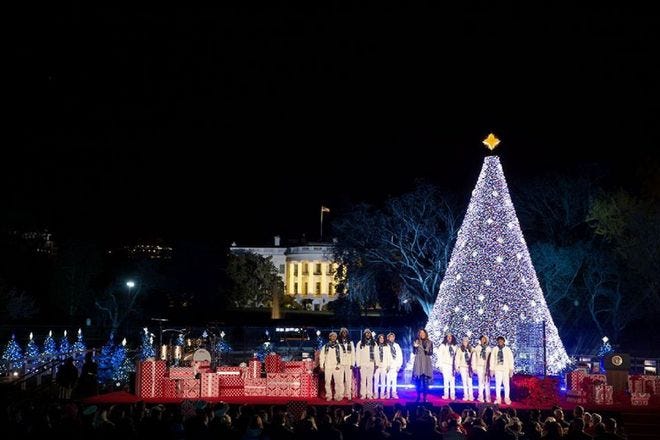 The lighting of the National Christmas Tree on the Ellipse dates back nearly 100 years. In 1923, First Lady Grace Coolidge allowed the District of Columbia Public Schools to erect a tree on the White House lawn. On Christmas Eve, a crowd watched as President Calvin Coolidge pressed a button and lit the 48-foot Balsam fir. Today, the event has evolved into a huge event complete with big-name performers on hand to sing holiday favorites and a countdown used to light the live tree which is maintained by the National Park Service. If you can’t make it to the show, don’t worry. You can still see the tree on President’s Park throughout the holiday season. METRO: Federal Triangle/Metro Center

Recommended for Things to Do in December because: The National Tree, along with the 56 smaller trees surrounding it known as the Pathway of Peace, is a sight to behold.

Gina’s expert tip: You can’t just go to this event. You have to enter a lottery and hope for the best. Good luck! 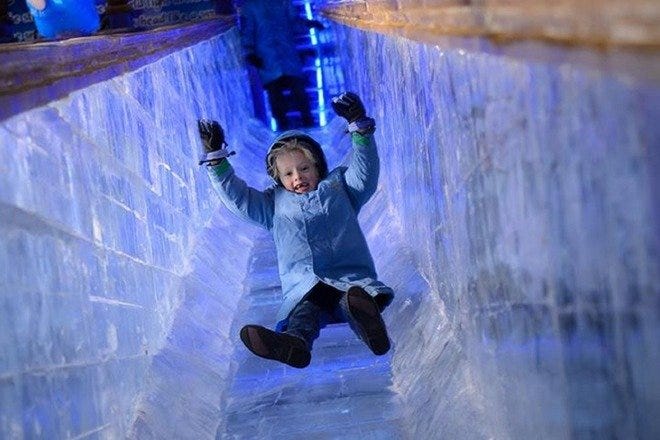 The hotel and convention center annually presents this festive event featuring a bevy of activities that will get you in the holiday spirit. ICE! offers participants the opportunity to careen down slides over two stories tall made entirely of the solid-liquid. Each year has a different theme which they incorporate into over a million pounds of – you guessed it – ice. This year’s theme is the beloved ‘Dr. Seuss’s How The Grinch Stole Christmas.’ Do not leave without checking out the show ‘Cirque Dreams Unwrapped’ in the Garden Atrium where performers put on a show on the stage and in the air. Once you come, you will understand why participants are made up of both hotel guests and locals. METRO: Branch Avenue

Recommended for Things to Do in December because: A cornucopia of holiday events, this venue brings winter indoors for folks to enjoy.

Gina’s expert tip: Wear snow pants if you plan to careen down the ice slides and pay attention to the rules. No going down head first or on your belly. The cold will also zap your phone battery so bring a charger!