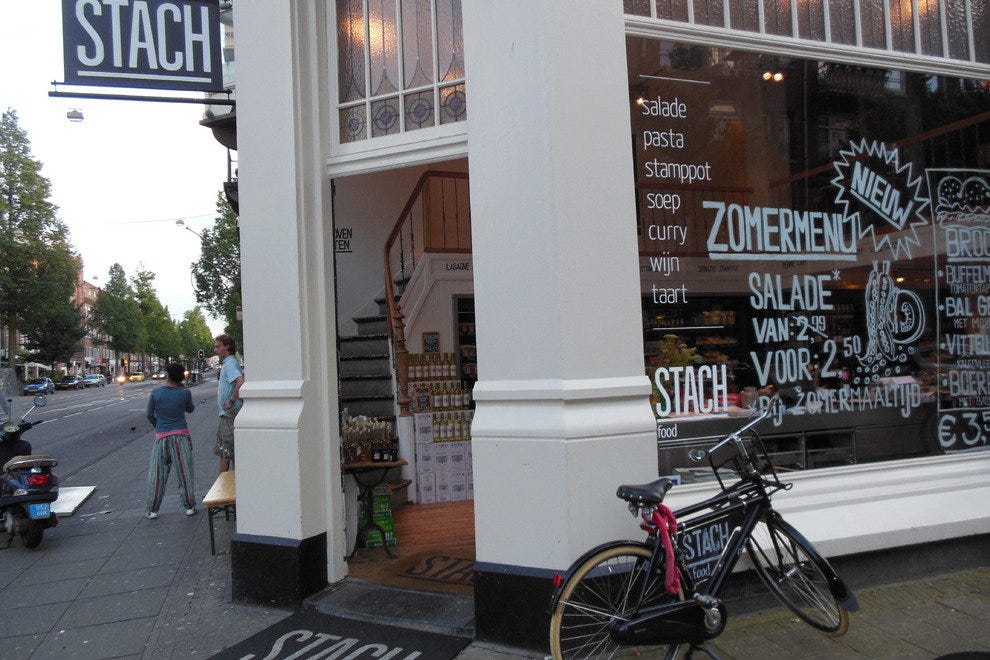 One of the best delicatessen stores in Amsterdam is Stach Food. This great food concept started a few years ago with just one location on the Van Woustraat in Amsterdam. Back then, a delicatessen store like this was a huge innovation to the current food offering. Stach Food offers fresh baked bread, organic groceries, take-out meals and a coffee and lunch cafe.

The name for the store is the first name of the owner: Stach. Every season, Stach chooses his favorite dishes for the store. Stach makes it easy for you by offering meals, soups and salads that are healthy so you don’t have to think about cooking dinner. He knows his suppliers in person, and Stach likes to tell you about them and why that ingredient is so tasty.

The menu at Stach Food changes every three months. For the summer months, the food is perfect for a picnic with warm weather. Or try the bites that are delicious with drinks with friends.

When he opens a new store, Stach has one rule: the location should be on a corner. And that’s exactly why a new Stach Food store is noticed by the locals straightaway. R

ecently, Stach Food opened three new locations: in the city center at the Jordaan area on the Haarlemmerstraat 150, near the Museum Quarter on the Nieuwe Spiegelstraat 52 and on the Admiraal de Ruyterweg in Amsterdam West. You can imagine that this tells something about the success of Stach Food with the Amsterdam locals.

The Van Woustraat in Amsterdam is always very busy with a lot of people traveling to work. In the Stach Store at the Van Woustraat, you can also stop by for lunch on the top floor.

The Spiegelstraat location of Stach Food is located in the museum and antique district of Amsterdam. This store is super small but has the complete stock of Stach Food and even a small bar in the back, where you can drink a glass of wine.

The Haarlemmerstraat is a real foodie street! A Stach Food store was the last hot spot to add to the food scene there. This store has the largest choice of fresh pastas.

The store at the Admiraal De Ruyterweg is the newest Stach Food store. This store is located in the upcoming part of Amsterdam West.

Stach is a great store to stop by for coffee or lunch during a trip to Amsterdam. To go or to eat there!