Work hard, play hard – then do it all over again the following day. Nightlife in Hong Kong is conducted at much the same pace as people work during the day. After all, there’s no point in earning all that money from nine to five if you don’t go and spend some of it later.

Where to start? Hong Kong is lucky as many of its top nightlife zones are right next to each other. Lan Kwai Fong in Central is adjacent to SoHo, and from there it’s only a few steps to NoHo, and then on to Tai Ping Shan, which is rapidly developing a name for itself as the trendiest after-hours hang out.

But Hong Kong nightlife is not all drinking, dancing, and more drinking. Stop by the Fringe Club for a dose of the arts, or head to Happy Valley between September and June for an evening of horse racing, which is still one of Hong Kong’s most thrilling entertainments.

Best of all, Hong Kong – by and large – is a very safe city, with little street crime or gratuitous violence, although of course, it pays to be sensible at all times and not take any unnecessary risks. 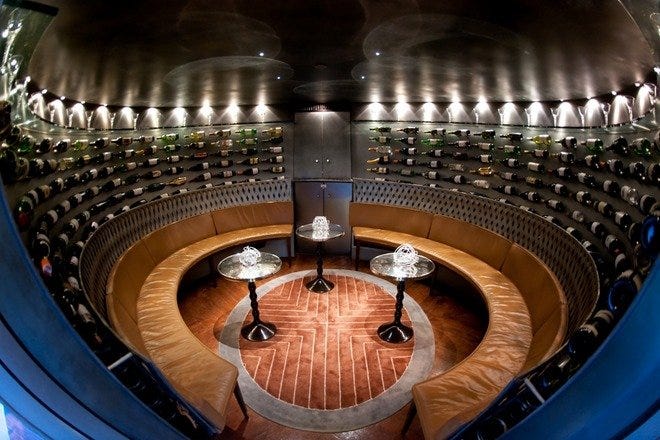 Photo courtesy of The Peninsula

The Peninsula bar is one of the classiest places in Hong Kong to get a drink and enjoy top-notch service while taking in the glittering harbor and stunning skyline. Opened in 1994, it was a forerunner of Hong Kong’s ever-growing coterie of harbor-view bars. after-hours, the bar is part of a fine-dining restaurant of the same name. The sophisticated space contains four sections from a wine bar to a sound-proof dance floor. The artistic and abstract interior is created by French celebrity designer Philip Starck, whose naughty but wonderful concept is still cutting-edge. Just as important as the cocktails and the view is a trip to the men’s bathroom. Gents will find themselves standing in front of a floor-to-ceiling glass wall overlooking Kowloon streets while putting the urinals to good use. This is partially what makes the bar so popular in Hong Kong.

Recommended for Best Nightlife because: Smart decor, cool vibes, great company, fabulous views: what more could anyone ask for?

Ed’s expert tip: Felix is one of the focal points of enjoying A Symphony of Lights with a drink in hand. If you plan to do this, make sure you call ahead to place a reservation or come supremely early to secure a spot. 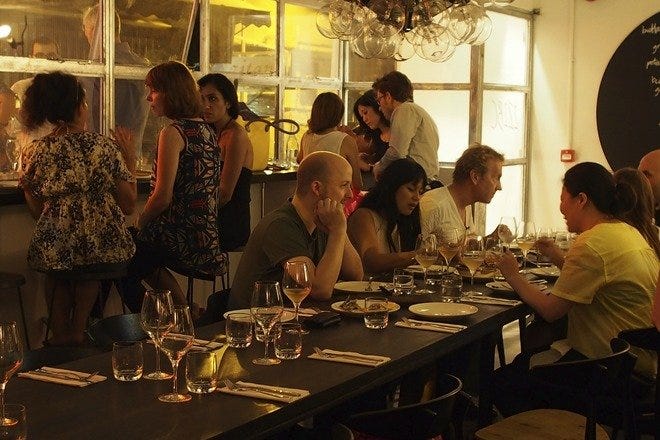 Photo courtesy of 121BC

First of all, enjoy the location. 121 could only be in Hong Kong. It’s on a steep street that’s dotted with traditional shops and just down the road from an incense-swathed shrine, yet well within the trendy entertainment zone that is SoHo. Secondly, enjoy the bar itself, with as fine a selection of Italian wine as you’ll find east of Brindisi. Sommelier Giorgio De Maria travels to vineyards where he meets with producers and sources artisan, minimal interventionist wines. There is always a variety by the glass to taste from the burgeoning collection, and there are some fine back vintages, like the 1943 Borgogno Barolo, which display the work of masterful producers.

Recommended for Best Nightlife because: 121 BC is typical of the cool hang-outs that have sprung up in SoHo around the Outdoor Escalator. 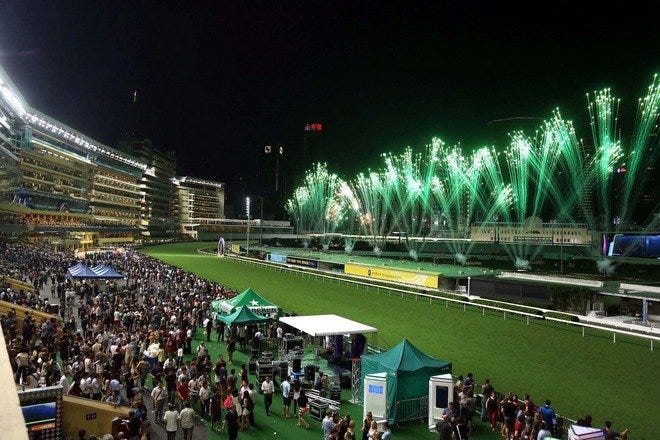 Surrounded by a curtain of high-rises, this downtown racecourse is one of the greatest stadiums on earth to enjoy a sweaty, noisy and adrenaline-pumping horse race at night. Dating back to 1844, the 55,000-seat racecourse is one of the earliest public facilities in colonial Hong Kong. Regular races take place every Wednesday between September and June from 7 pm on the 30-meter-wide grass track. A 978-seat iPad-equipped betting hall is located on the second floor of platform one. Visitors can either pay HK$10 (US$1.3) to sit on the public spectator seats or HK$100-150 (US$13-19) to enter the member-only zone. There are a total of seven restaurants and bars in the complex from Cantonese dining to al fresco drinking. On the second floor of the Happy Valley Stand of the racecourse, there is a 670-square-meter museum, Hong Kong Racing Museum, tracing the past and present of the city’s enduring pastime.

Recommended for Best Nightlife because: Nothing excites Hong Kongers quite so much as an evening at the races: join in and get to know what makes the city tick.

Ed’s expert tip: Grab a place down by the rail as the horses thunder by just inches away. 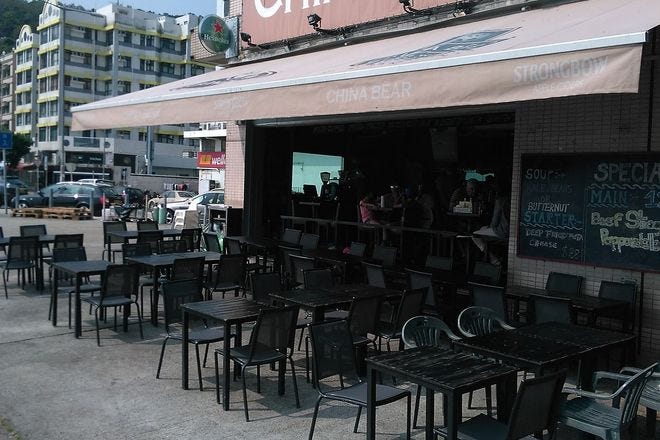 The China Bear’s the best pub on Lantau. There again, it’s almost the only pub on Lantau outside the expat enclave of Discovery Bay. Such quibbling is beside the point, for the Bear, right next to the ferry pier with a view that stretches all the way to Hong Kong Island, is an institution. This is very much a locals’ hangout, with darts, quiz nights, plenty of brews on tap and a fair bit of banter going back and forth. Sit outside (assuming the weather is cooperating) and soak up the island atmosphere. And like most bars and pubs nowadays, the Bear does food too.

Recommended for Best Nightlife because: The China Bear offers a great opportunity for an evening’s carousing out of the city.

Ed’s expert tip: The Bear is within sprinting distance of the ferry so just listen for the bell one minute before departure.

Read more about The China Bear → 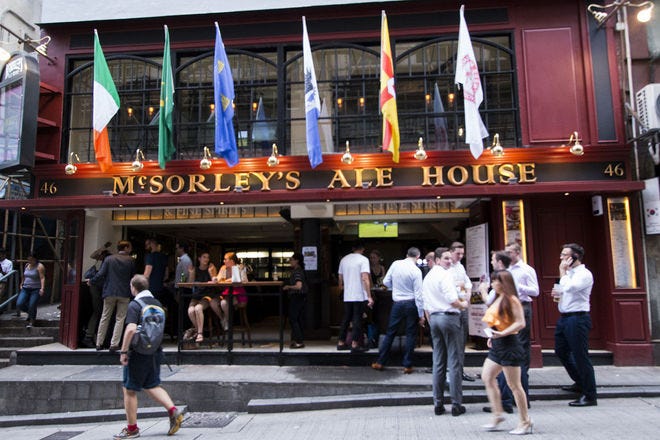 Inspired by the McSorley’s Ale House in New York City, but with a much better variety of beer. It’s a traditional Irish Victorian-style pub, with lots of wood, and when the weather’s fine the doors and windows open onto the street. If you want a tad more privacy head upstairs to one of the cozy booths. As for food and beverage, McSorley’s has an incredible selection of beer (lots of imports, Guinness and McSorley’s on tap) and whiskey, and serves hearty pub grub like fish and chips, burgers and a variety of pies as well as Guinness sausage and mash. Several TVs are tuned to major sporting events, and there’s live acoustic music during the week.

Recommended for Best Nightlife because: You can’t not have fun here; it’s almost as if McSorley’s is a social service rather than a business. 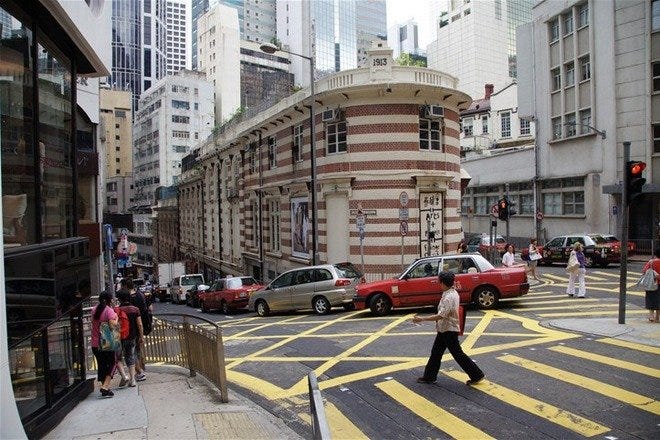 Upscale avant-garde entertainment is the focus at the Fringe Club. The club’s award-winning renovations of a former dairy warehouse have left it with two theaters, two art galleries, a photography gallery, rehearsal space and studios, a fine restaurant and two bars, one of which is an amazing rooftop garden bar. This is where creative, artsy types sip cocktails and munch on tapas; the club itself hosts a variety of performances each week, from bands to theater to book readings. The bars do not have a cover charge. Performance ticket prices vary. The red-brick building is home to the annual Fringe Festival and the base of Hong Kong Foreign Correspondents’ Club.

Recommended for Best Nightlife because: This historic building is where to find cool indie shows and mingle with the local cultural and creative minds over a drink.

Ed’s expert tip: The club’s rooftop bar has a nice view over the nightlife zone Lan Kwai Fong and the office towers in Central.

Hong Kong was ruled by Great Britain for over a hundred years, and the influences of Chinese and European cultures can be seen all over the city in nearly every facet of life. There’s no better place to taste the mix of these two worlds than at Sevva restaurant and bar. The decor is unlike anything in Hong Kong and the menu is as diverse as the patrons who frequent this top of the line establishment. Sevva is supposedly pronounced “savor”, and patrons are encouraged to take their time enjoying food, drink, the view and the buzz of this very superior establishment.

Recommended for Best Nightlife because: Sevva overlooks the heart of Hong Kong, as it’s right next to the seat of government, and the top banks, hotels and clubs.

Ed’s expert tip: There is a dress code at this venue, but it’s a lax one: collared shirts and business casual wear are preferred. 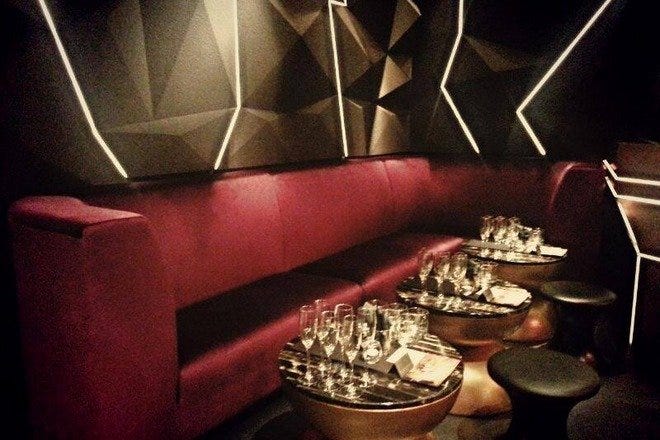 Tazmania Ballroom is a dance club, for sure, but added to that is a lounge and, gasp, games. Twice a week, thanks to some ingenious hi-tech design, the billiards tables are hoisted out of the way to make room for ping pong tables. Seriously. For the rest of the week, Tazmania Ballroom is all out cool sounds, cool drinks and a cool crowd. Owned by one of the city’s foremost socialites, Tazmania Ballroom attracts a hip group of folk, who take their partying, and their drinking, very seriously. Right in the heart of Central, this is a place to go for fun.

Recommended for Best Nightlife because: This is one of Hong Kong’s most unusual night spots: it’s witty, original and fun.

Ed’s expert tip: Dress to impress, this place has got class. So no tee-shirts or scruffy jeans. 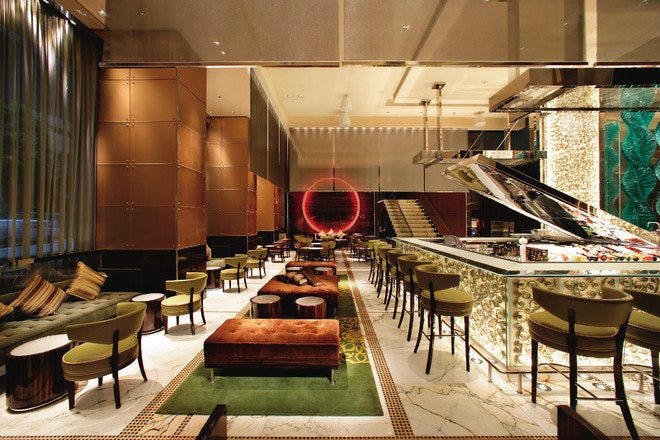 The Landmark Mandarin Oriental’s MO Bar is one of the most sophisticated nightlife hangouts on Hong Kong Island. The two-story space was created with amazing attention to detail. Textures abound, from the floor (stone, mosaic tiles, carpet) to the walls (leather upholstery, metal, wood) to the furnishings (velvet, leather, wood). There are glass water walls, sculptural metal fixtures and walnut window shades, and the whole is done in classy earth tones. As a hotel bar, MO carries a wide selection of alcohol or non-alcohol drinks from every corner of the world. DJs spin sounds from Wednesday to Saturday, and occasionally celebrities such as Kelly Clarkson and Alicia Keys will host mini concert here.

Recommended for Best Nightlife because: As a lesson in understated chic, MO has few equals.

A traditional jazz band takes the stage nightly at Ned Kelly’s, which also offers a lively ambiance and a good selection of classic pub food. The club has happy hour specials and an Australian menu that showcases culinary favorites like meat pie and mashed potatoes with onion gravy. The noise levels are pretty high, but this is all part of the fun at Ned Kelly’s. It’s a great favorite with long-term Hong Kong residents, and many regular visitors make this a definite must every time they come to Hong Kong. Getting on for 50 years since it first opened, this is a Hong Kong classic.

Recommended for Best Nightlife because: Ned Kelly’s has been in business for more than 30 years which is a true indication of its worth.

Ed’s expert tip: Tsim Sha Tsui is a retail paradise, but Ned Kelly’s is a true home of entertainment.