San José del Cabo’s dining scene is in many ways even more impressive than that of sister city Cabo San Lucas. San José is home to over a dozen first-class restaurants, as well as some of the region’s most accomplished and innovative chefs. Traditional Mexican cuisine, Baja Med style fusions, and fresh local seafood are the focus of most menus, but there are a number of eclectic eateries that boast original and provocative concepts, or that have applied their own unique twist to established movements.

Farm-to-table dining, for instance, has been taken to an entirely new level at Flora Farms and Huerta Los Tamarindos, two organic farms that also offer cooking classes, fresh produce markets and terrific onsite dining spots (Flora’s Field Kitchen at the former, Restaurante Los Tamarindos at the latter). At each of these remarkable restaurants diners can practically reach out and touch the food that will soon be on their plates.

The best of the trio of farm-to-fork meccas in the small community of Ánimas Bajas, however, resides at the modestly named Acre Baja. Like Flora Farms and Huerta Los Tamarindos, the 25-acre Acre Baja showcases an organic farm and a celebrated eatery set in the scenic foothills of the Sierra de la Laguna mountain range. That eatery, Acre Restaurant & Cocktail Bar, continues to draw rave reviews for its locally sourced cuisine and creative cocktails.

Tadd Chapman is another local innovator. The chef has built an indoor wine cave at his sprawling Don Sanchez Cantina–the best of his downtown eateries, which also include Habanero’s and Retro Burger Bar–and he has been at the forefront in promoting top producers from Baja California’s Valle de Guadalupe.

For more traditional fare, downtown favorite Tropicana rarely disappoints. Located at a lovely hacienda-style inn in the heart of downtown San José del Cabo, Tropicana is the city’s top stop for traditional Mexican cuisine and live music, and has been for 30 years. 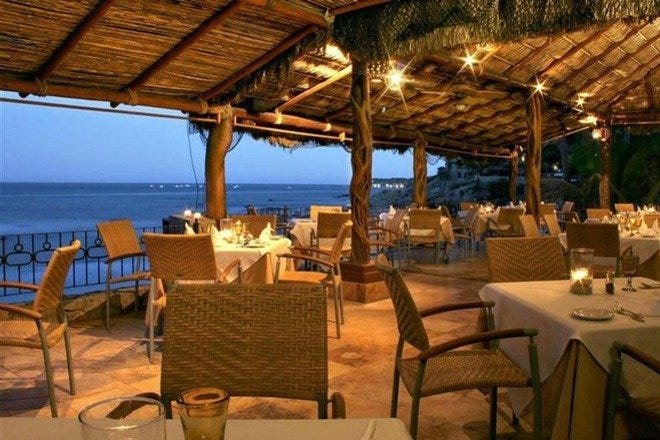 A gorgeous palapa-shaded setting and beautiful views of the incoming surf from the Sea of Cortés distinguish the signature eatery at the boutique Cabo Surf Hotel on Acapulquito Beach. As you might expect of a seaside restaurant, fresh seafood is the focus, although 7 Seas also showcases some traditional Mexican dishes, as well as a large selection of delicious desserts. Highlights include the chocolate clams, sea-farm raised totoaba, braised baby rack of lamb and rich gourmet Mexican coffees from the highlands of Chiapas and Oaxaca. Notable events include memorable full moon dinners pairing specially designed menus with live jazz.

Recommended for San Jose Del Cabo’s Best Restaurants because: 7 Seas is one of the top beachfront dining options in San José del Cabo.

Chris’s expert tip: Coffees are available from some of Mexico’s top producers, including Solo Dios from Chiapas, and Blasón Gourmet from Oaxaca. 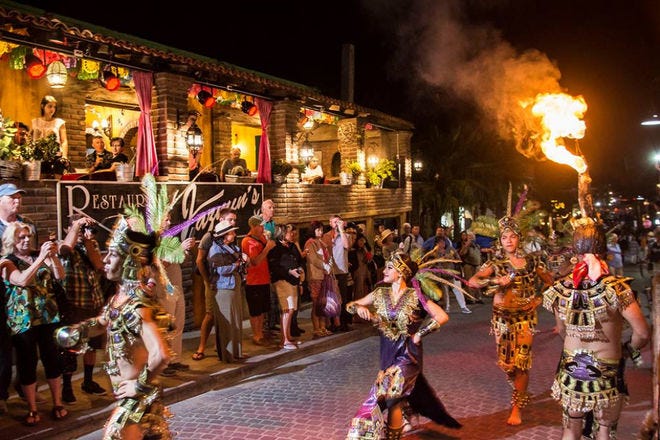 The dinner shows here are amazing, and a showcase for traditional Mexican music and dancing. Pre-Hispanic Nights (Thursdays), for example, are headlined by indigenous artistic expressions, while Beautiful México (Mondays) spotlights regional dances from around the country. Don’t let the entertainment distract you from the food, however, which includes some of the finest traditional Mexican fare available in Los Cabos: from breakfast standards like huevos rancheros and divorciados to lunch and dinner favorites like tamales and fajitas. Fresh local seafood is also shown off to good advantage in shrimp tacos, sea bass Veracruzana and other dishes. An air-conditioned dining area is yet another attraction, particularly during the hot summer months. 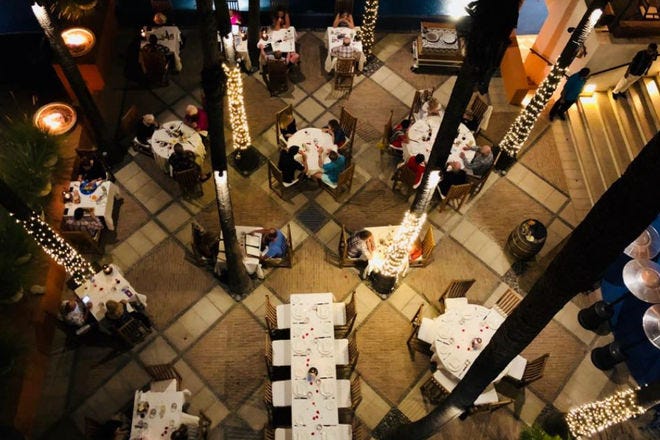 Find your vacation bliss to the sound of cascading waterfalls and rustling palm fronds combined with the savory delights of signature dishes like Med-Mex fajitas, roasted chicken with chocolate, and a duo of Mexican moles. Chef Loïc Tenoux’s innovative Mexican-Euro fusion cuisine is the chief draw at Mi Cocina, a San José del Cabo fine dining fixture that boasts a lovely courtyard setting at artsy boutique hotel Casa Natalia. But outstanding service and a serene and central downtown setting also contribute to the restaurant’s sterling reputation locally, as do the masterfully mixed martinis and impressive array of blanco, reposado and añejo tequilas at the palapa-shaded bar. The addition of a Baja Oyster Bar offers even more tasty options.

Recommended for San Jose Del Cabo’s Best Restaurants because: Mi Cocina is one of the top hotel restaurants in Los Cabos. 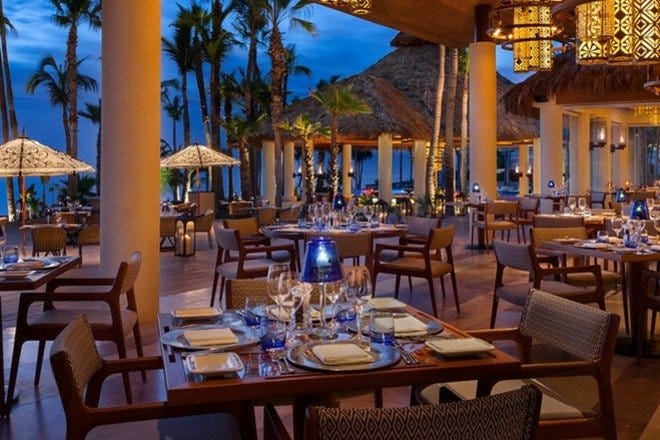 A perennially popular draw at benchmark ultra-luxury resort One&Only Palmilla, this elegant seaside eatery originated by Moroccan born and Jean-Louis Palladin mentored chef Larbi Dahrouch is distinguished by its superb food, impeccable service, and romantic candle and moonlit views of the Sea of Cortés. The kitchen serves up exquisite Mexican cuisine featuring Mediterranean influences – call it “Mexiterranean” – with menus that change seasonally (and sometimes daily) to reflect the finest available ingredients. Many specialties are made tableside, including handmade tortillas, guacamoles, ceviches and moles. Start at the bar for sunset cocktails, framed between an infinity pool and a dramatic meeting of sea and sky.

Recommended for San Jose Del Cabo’s Best Restaurants because: Set at the luxurious OneOnly Palmilla, Agua is one of of the premier fine dining establishments in the San José del Cabo area. 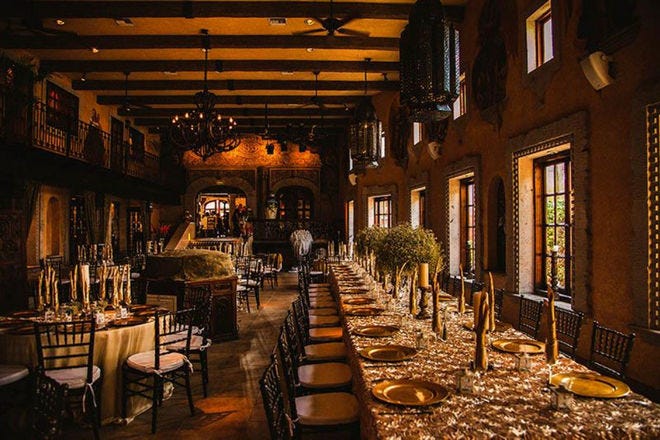 The onsite restaurant at the Hacienda-style Tropicana Inn, also known as the Tropicana, has been considered one of the best in Los Cabos for over 30 years now. It’s certainly hard to beat the location, which offers breezy al fresco dining in the heart of downtown San José del Cabo. Tropicana is located less than a block from City Hall, and two blocks from the old Catholic church, Parroquia San José. The food is the standout attraction, however, with a menu focusing on traditional Mexican cuisine and fresh local seafood. In addition to the tables out front, there is a lovely colonial-style indoor dinner area featuring colorful murals.

Recommended for San Jose Del Cabo’s Best Restaurants because: Tropicana has been a fine dining fixture in San José del Cabo for over 30 years. 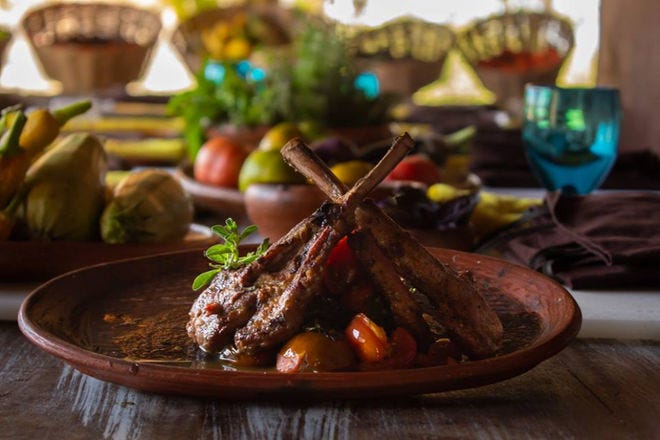 Like Flora’s Field Kitchen, Restaurante Los Tamarindos showcases intimate farm-to-table dining in a rustic restaurant setting outside San José del Cabo, as well as cooking classes and an onsite organic market. Menu standouts at the scenic al fresco eatery – which overlooks the farm – include vegetarian chile rellenos and baked eggplant rolls, as well as entrée highlights like mesquite wood baked free range chicken and pork shank with green mole. The memorable cooking classes feature a “hands on”, chef-led immersion into Mexican and Mediterranean culinary traditions, which takes place during the preparation of a four course meal. Farm fresh fruits, vegetables and herbs are available from the onsite organic market, which is open 8 a.m. to 3 p.m., Monday through Saturday.

Recommended for San Jose Del Cabo’s Best Restaurants because: Set at an organic farm, Los Tamarindos offers one of the area’s most memorable dining experiences. 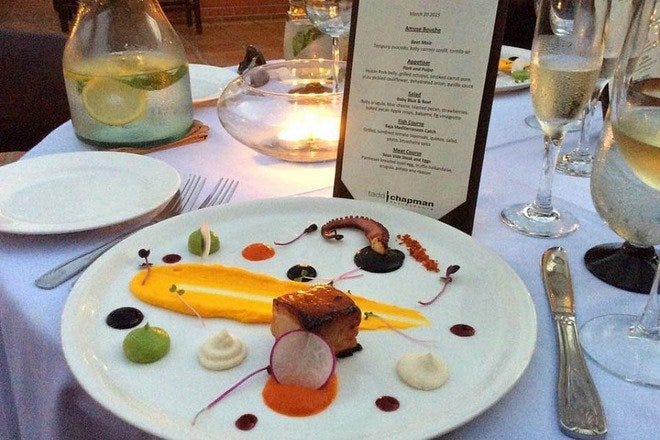 “Contemporary Baja fusion” is the focus at chef and restaurateur Tadd Chapman’s acclaimed downtown dining fixture, Don Sanchez; where daily tasting menus showcase the freshest local and seasonal ingredients. Chapman sources organic produce from his own local farm, Sánchez Orgánico, and grass and grain-fed beef that are wet-aged and seasoned with natural un-iodized sea salt from Guerrero Negro. The wine program here is the best in Los Cabos, with a sommelier on hand for advice on pairing options from the list of 300 plus wines, or sales from the carry-out wine shop. Wine themed events are hosted on a monthly basis, and live entertainment is also a big draw, with the outdoor courtyard hosting a stage and spacious dance floor.

Recommended for San Jose Del Cabo’s Best Restaurants because: One of the largest dining venues in Los Cabos, Don Sanchez is also one of the few to offer carry-out wine sales.

Chris’s expert tip: Wines are a big focus at Don Sanchez. There are over 300 labels available, with modest corkage fees. Carry out sales are permissible until 11 p.m. 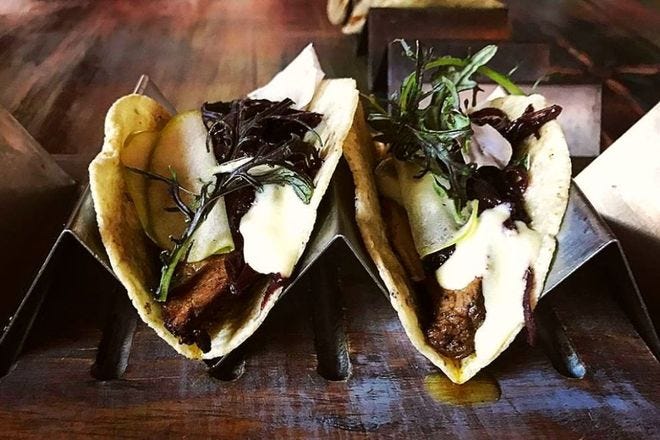 La Lupita is the taco mecca of Los Cabos, the place where discerning locals will happily pay un-taco like prices to sample gourmet varieties of México’s most famous comfort food staple. In many cases, making reservations to do so. Crowds literally spill out the door during the city’s seasonal Thursday night Art Walks, but the place is packed on a nightly basis. La Lupita’s taco offerings aren’t out-of-the-ordinary, either – there’s no gold flake or rare ingredients – simply extraordinarily well prepared examples of age-old favorites: barbacoa, al pastor, and the like. Mezcal is the most fashionable pairing for La Lupita’s tortilla wrapped treasures, but fresh chapulines (grasshoppers) are also available, as a chile roasted accompaniment in the Taste of Lupita, with sides of blue chips, pumpkin seed and tomato dip, guacamole and fresh lime. Thanks to its ongoing popularity, La Lupita has recently opened a second restaurant in Cabo San Lucas. 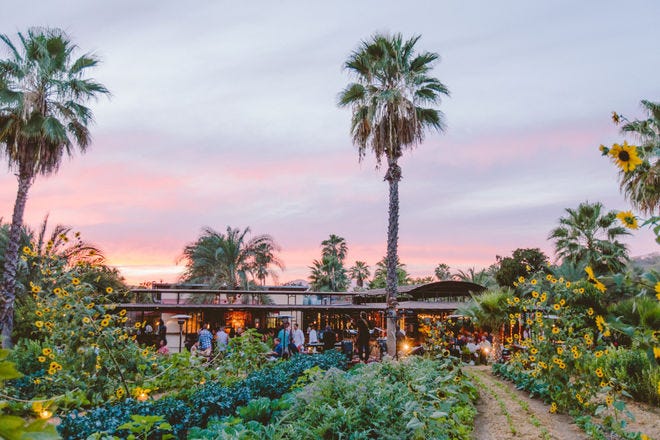 Flora’s pioneered the farm-to-table dining scene in San José del Cabo, and remains a mandatory stop for visiting foodies. The restaurant looks out over a 10-acre organic field at Flora Farm, so close diners can almost reach out and touch the food they’ll soon be eating. Well, actually the meat is sourced from a nearby ranch, but you get the picture. This is fine dining at its most intimate. And it is fine dining. The food is superb, and ranges from gourmet pizzas to heartier fare like farm-raised pork or homemade pastas. Sunday brunch is especially popular, although reservations are recommended for any visit to the restaurant. The adjacent Farm Bar serves up fresh fruit juices, wine, craft beer and cocktails. In addition to the onsite bar, bakery and organic grocery, the property also includes boutique shops and some quaint culinary cottages. 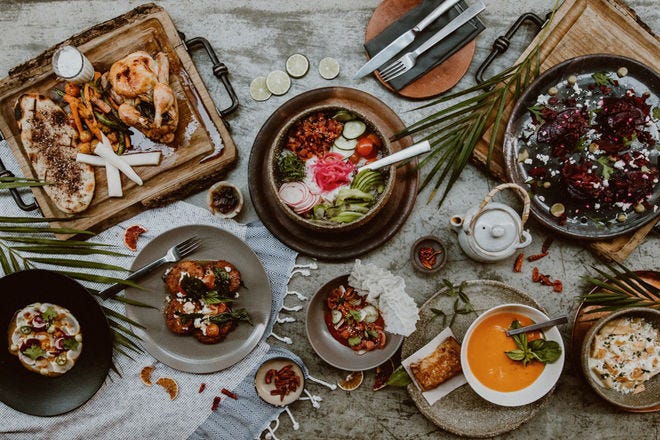 Acre Baja may be best known now for its boutique treehouse accommodations – the only ones of their kind in Los Cabos – but for locals or visitors staying elsewhere in the cape cities, the primary reason to know and visit this picturesque property is its superb farm-to-table restaurant, Acre Restaurant & Cocktail Bar. Here lies a foodie oasis, with dishes and drinks crafted around ingredients found on the 25-acre property’s farm, or sourced from local ranchers and fishermen. Opened in 2016 by Stuart McPherson and Cam Watt, owner of Vancouver’s renowned The Keefer Bar, Acre has quickly become one of the leaders of San José’s thriving locavore movement; a standing that should only rise now that Alex Branch has taken over executive chef duties. Branch has been a major culinary figure in Los Cabos for years, working as executive sous chef at ultra-luxury One&Only Palmilla, helming Enrique Olvera’s Manta at The Cape: A Thompson Hotel, and acting as executive property chef for the Hakkasan Group at The Grand Mayan at Vidanta Los Cabos. Branch’s arrival signals the best is yet to come for what is already a benchmark local restaurant.

Recommended for San Jose Del Cabo’s Best Restaurants because: Acre is the best restaurant in San José del Cabo, and one of three great farm-to-table restaurants located in the small community of Ánimas Bajas.