When attending a Washington Nationals game, you can find a bevy of amazing food venues inside the Washington, D.C. -based stadium like Ben’s Chili Bowl, Chesapeake Crab Cake Company and Knotted Up are some of our favorites. But let’s be honest…when Ryan Zimmerman hits a single or Stephen Strasburg strikes out a heavy hitter, we want to be able to clap both hands and scream without a ton of food ready to fly out.

Grabbing a meal before or after the game is a great option in the Navy Yard. Once a culinary wasteland, this neighborhood has been transformed by the ballpark into a great and ever-growing culinary destination.

Looking for dishes from around the world? Head to Agua 301 for authentic modern Mexican cuisine including a selection of empanadas, tacos and mouth-watering entrees. Osteria Morini offers hearty Italian dishes in a welcoming atmosphere.

Summer days can get pretty toasty in the district so grab a cold one at a local brewery like Bluejacket or a neighborhood bar such as The Big Stick to quench your thirst.

You won’t strike out on taste at any of these Washington, D.C. venues near the Nationals ballpark. 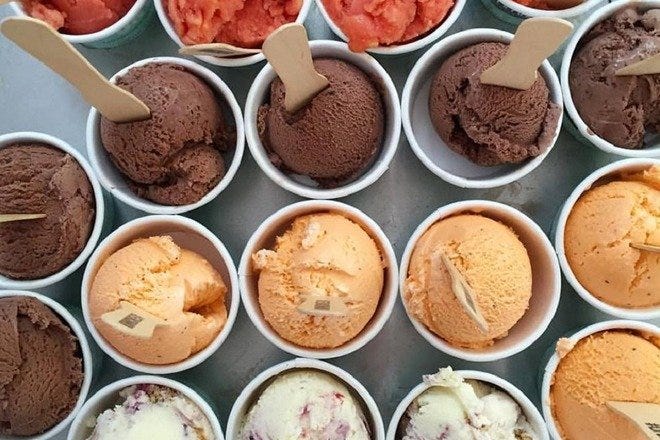 There is only one thing sweeter than when the Nationals win â” a sugary treat from this Southeast destination. You’ll find around 20 different flavors to chose from â” staples like bold vanilla and chocolate to Thai iced tea, blueberry pie and banana bourbon caramel. Flavors do change seasonally so check out their menu before you go. A majority of flavors accommodate those with gluten needs but alert a server who can guide you to the best choices to meet your dietary needs. Milk and cream used in their ice cream are produced by South Mountain Creamery â” a dairy farm just 50 miles away. METRO: Navy Yard

Recommended for Restaurants near Nationals Park because: What better way to cool down before or after a hot summer game than to hit up this southeast destination? 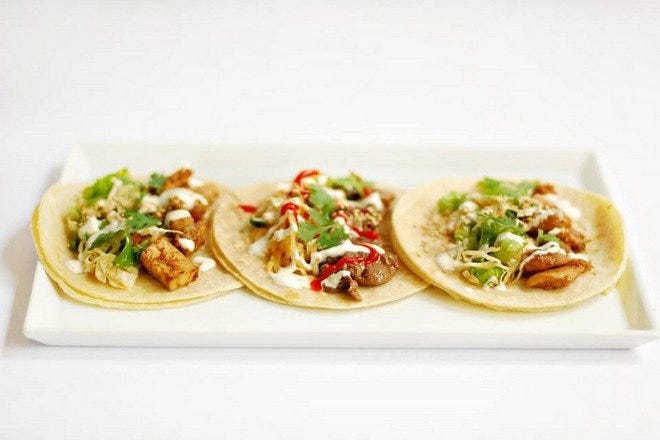 TaKorean first served hungry Washington, D.C. residents, tourists and business folk as a food truck. Today, the fast, casual venue has spread to three brick and mortar locations throughout the district. One you will find close to Nationals Park waiting to serve you Korean BBQ tacos. Diners pick everything that goes into their meal including the style, protein, slaw and toppings. Don’t leave without adding on some chips and salsa as a side. Those with dietary restrictions need not worry. They offer a number of options for those with dairy, vegan, vegetarian and gluten-free needs. METRO: Navy Yard

Recommended for Restaurants near Nationals Park because: Want to grab a quick meal before game time? Head to this Korean BBQ escape for a fast, casual atmosphere filled with good food.

Gina’s expert tip: Try the soju, a Korean spirit, to go with your meal selection.

With a baseball stadium located right by the water, it’s natural for your stomach to crave some creatures from Poseidon’s domain. Besides jumping into the Anacostia River (which I would advise against0, folks should make their way to Whaley’s for a top-notch seafood experience. Grab some oysters and sashimi at the raw bar or sit down for a dish from their kitchen like binchotan scallops, little neck clams or monkfish katsu sando. Each menu notes where the seafood was caught and many are from the region.

Recommended for Restaurants near Nationals Park because: Cool off before or after a game with icy cold oysters and clams with waterfront views.

Gina’s expert tip: Before a night game, come here for happy hour where you can chow down on sweet and spicy togarashi chips, tempura mushrooms and sake marinated chicken skewers for a reduced rate! 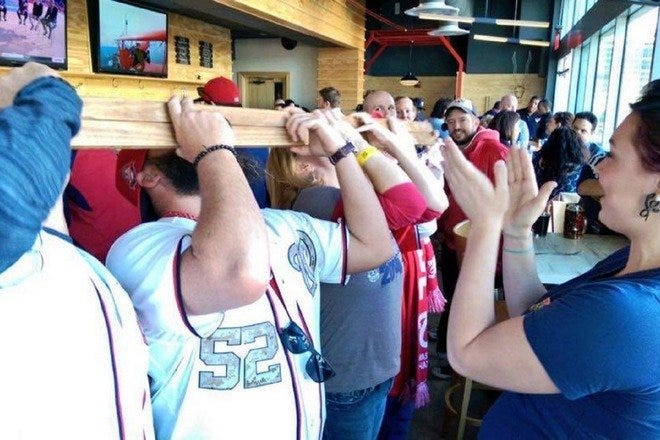 Photo courtesy of The Big Stick

When your favorite player hits a game-winning home run or your team scores a much-needed touchdown, most friends will yell, cheer and scream. The Big Stick takes it to the next level. You and your friends can drink a shot at the same time off of a wooden ski (Watch What Happens Live fans will be in heaven). Located within walking distance to the Washington Nationals Park, this venue meshes a rustic, lodge-themed with sports bar food and fun. Their menu changes often so don’t be surprised on a return visit to see new items featured. This includes both drink and food menus. METRO: Navy Yard

Recommended for Restaurants near Nationals Park because: With a ski lodge feel and close location to Nationals Park, this sports pub hits a home run.

Gina’s expert tip: You can only do shotskis if you have a group of four.

Read more about The Big Stick → 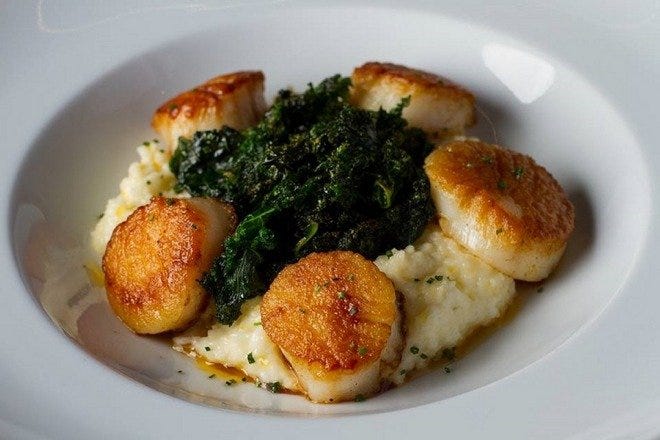 Located just a block away from the Navy Yard Metro station, this restaurant serves modern American fare that is both upscale mixed with ballpark ready dishes. Just look at the dinner menu which features a mix of entrees such as Peking duck, burger and fries, pan seared rockfish and six different pizza selections. Want to grab a quick bite before the game? They offer small plates and nibble menus showcasing dishes such as fish tacos, pork belly sliders, wings grilled asparagus and grilled romaine. Early games on Sundays are no problem because the venue is open for brunch serving a delicious menu that will have you ready to cheer on the Nationals! METRO: Navy Yard

Recommended for Restaurants near Nationals Park because: With upscale and fun ballpark food mixed together, this restaurant pitches a perfect menu.

Gina’s expert tip: Happy Hour runs Monday through Friday from 3:30 to 7 p.m. It’s a great spot to get drinks instead of having to pay higher ballpark prices.

Every time a guest walks into this Navy Yard restaurant, Chef Haidar Karoum aims to take everyone through his own culinary journey to include nods to his Lebanese heritage and travels through southeast Asia and western Europe but also incorporate the seasonal bounties from their current Mid-Atlantic location. Named for both the Greek goddess of agriculture and Karoum’s niece, the restaurant offers daily dinner service(grilled Berkshire pork chop, hanger steak and roasted mushroom hummus are standouts) as well as a weekend brunch that will have you setting your alarm to get up early. Seating just over 100 guests inside, the outdoor patio holds 32 during summer months and fills up fast!

Recommended for Restaurants near Nationals Park because: Before or after indulging in America’s favorite past time, head to this restaurant for a culinary journey across the world.

Gina’s expert tip: Hot buttered apples are amazing any time of year but this dessert really hits the spot during cold nights after a baseball game.

Looking for modern Mexican fare? Head to Agua 301 which showcases a contemporary take on the cuisine with infusions of modern flair. This is not a Tex-Mex venue so know before you go. Start off the meal with bocaditos (small bites) or try their selections of ceviches, soups, salads, empanadas and tacos. Be sure to leave room for choices off of the entrees menu especially for the pesto crusted salmon, enchiladas vegetarians and paella Mexicana. They offer more than 50 tequilas and mezcals, margaritas and creative cocktails so drink all you want because the Metro is nearby. METRO: Navy Yard.

Recommended for Restaurants near Nationals Park because: Blending contemporary cuisine with modern flair, this venue strikes out all the competition.

Gina’s expert tip: Don’t leave without trying their guacamole selection â” either traditional with avocado, de Jaiba with jumbo lump crab and corn or de la Dia â” their guacamole of the day.

Walking into the brewery’s nearly century-old building, your first reaction will probably be to look up. Known as ‘The Boilermaker Shops,’ the building was part of the Navy Yards ship and manufacturing complex. The only thing more impressive than the building is the beers they serve to thirsty customers. Their libations menu constantly rotates so every visit may lead to a new beer to drink. (Imagine the possibilities!) Now before you go and fill up on beer, the venue has a great seasonal food menu. A recent spring menu featured snacks, salads, fish, meat, and sandwich offerings. METRO: Navy Yard.

Recommended for Restaurants near Nationals Park because: With one-of-a-kind brews and dishes to match, Bluejacket scores high on any foodie’s (or drinkie’s) must-try list.

Gina’s expert tip: Order samples so you can find which beer quenches your thirst the best.

The word ‘osteria’ in Italian means a place where a person hosts guests. Diners will get that vibe as soon as they walk in the door at this Navy Yard-based casual eatery which features an open kitchen so patrons can see what each chef is working on and beautiful views of the Anacostia River. Featuring northern Italian fare, you’ll find traditional pasta from Romagna, cured sliced meats served with grilled bread and tigelle Modenese, anti-pasta and a variety of different entrees. Bring your glasses in order to make an informed decision off the impressive wine list. METRO: Navy Yard

Recommended for Restaurants near Nationals Park because: With a welcoming atmosphere and views of the Anacostia River, this is a great spot to grab a hearty Italian meal before or after games.

Gina’s expert tip: Try the Torta di Formaggio Al Limone aka lemon whipped ricotta cheesecake off the dessert menu. It is a must-eat!

By: adminPosted on April 9, 2021Categories: Travel