The theater opened its doors in conjunction with the premiere of “ANNE,” a play sharing the unedited story of Anne Frank

A new and unique theater has moved into Amsterdam, joining other established venues such as DeLaMar, Stadsschouwburg and Carre.

Theater Amsterdam, situated in the Westelijke Houthavens along the IJ River waterfront in Amsterdam, officially opened May 8, 2014. The theater, completed in a short time of only nine months, was custom built for ANNE, the play it’s currently running. 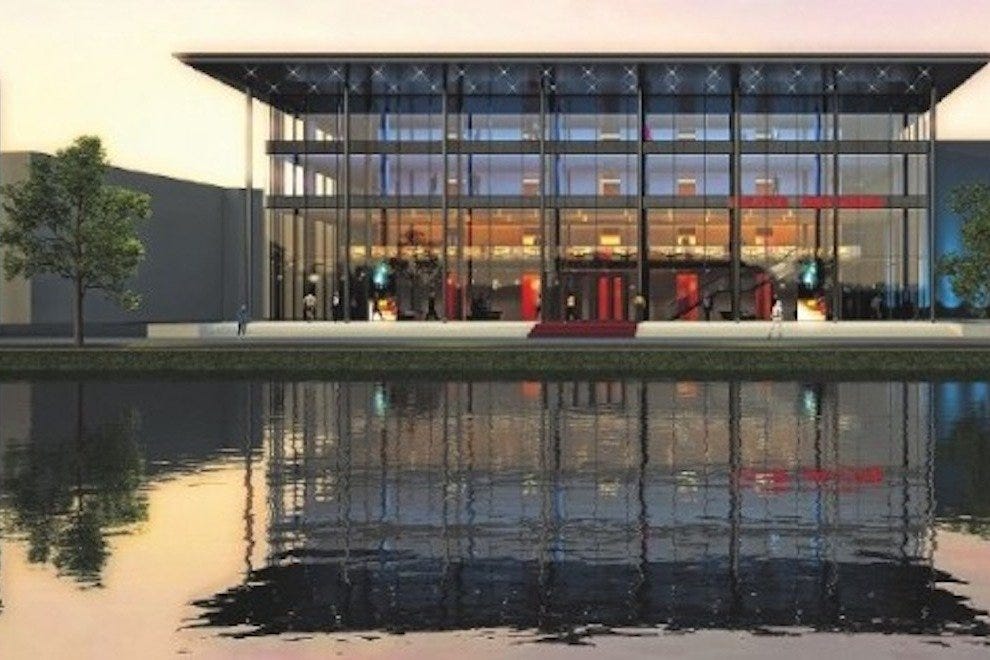 The 4,200-square-meter (over 45,000-square-feet) theater hall, incorporating state-of-the-art technology, allows large productions. The play ANNE, for instance, integrates larger-than-life photos, video and audio recordings. One of the set pieces, the Secret Annex, even rotates 360 degrees, enabling the audience to see the house from all angles.

“It’s the largest set ever built for a play, as far as we know,” says Kees Abrahams, producer of ANNE and founder of Imagine Nation.

The theater’s atrium is striking. Floor-to-ceiling windows provide a panoramic view over the harbor, and soft, twinkling lights illuminate the interior.

The box office is located on the left as one walks in. Guests can then check their coat and other belongings in the cloak room (garderobe, in Dutch), opposite the main entrance, and if need be, pick up headphones for the translation system.

Patrons can enjoy a meal – lunch or dinner – at restaurant Boven de Planken before the performance. For those that want something lighter, the bar, located near Entrance A, serves a variety of beverages, such as coffee, tea, beer and organic wine, as well as delicious finger foods.

Alternatively, guests can select snacks out of a special vending machine situated near Entrance B. It’s not an ordinary one, though, as it’s shaped like Amsterdam canal houses. Snack boxes and drinks can be pre-ordered for intermission.

Relax in the foyer on the stylish couches, or grab a seat at one of the tables. If weather permits, sit outside on the steps. There are little elevated blocks that service as chairs, and the small tables are suitable for setting down a drink or two.

The venue is accessible by car, bus, boat and bike. The car park, with 300 parking places, is situated next to the theater. Parking vouchers cost €12.50, and they can be arranged when you book your tickets.

Visitors can also walk from Amsterdam Centraal Station, which will take about 40 minutes, or hop onto the bus, either line 22 or 48. From the Oostzaanstraat bus stop, it is a 20-minute walk to the theater.

The boat, on the other hand, provides a unique method of travel. The boat ride lasts about 30 minutes and costs €8.50 for a round trip ticket. For evening shows, the boat departs from Pier 14, while matinee performances pick up at the Coffee House, located in front of Centraal Station.